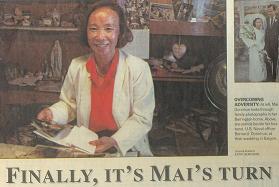 by James A. Merolla, The Providence Journal Bulletin, June 25, 1997

They write Hollywood scripts about women like Mai Donohue and no one ever believes such stories could be true.

When you meet this tiny dynamo with the warm manner, the thoughtful eyes and the ready grin, you wonder why she doesn’t wear the weight of the world on her face. She has every right to, given her history.

In 1945 or 1946, when Mai (pronounced My) was a year old in the village of Thong An Ninh in southern Vietnam, nearby Viet Minh soldiers, jealous of her family’s status as major landowners in the valley, raided her home, killing her grandfather, father and two uncles.

Her mother was 27, with three children, and seven months pregnant. Unable to read or write, her mother sold parcels of her land to pay for her children’s schooling.

When she was about 11 (she doesn’t know exactly how old she is, most likely, 51) her mother sold her last piece of land. After Mai did her daily chores of carrying the water, feeding the pigs, chickens and ducks, watering the vegetables, sweeping inside and out, spinning the cotton and weaving the cloth, her mother told her she could no longer attend school.

Her brother would go instead. In a memoir, she wrote about the shock.

“I thought I was hearing it wrong. I was about to ask her why but she walked away. She left me standing there and no one to comfort me. I cried a lot but it didn’t help me any. When I was young, more often I asked myself, ‘Why me?’ but when I was older, I said, ‘Why not?’ I can’t change my past. But I can build my future.”

A seed was planted in Mai that day. A seed that she nurtured even when her mother told her she would marry a man she had picked out for her. She was about 13.

Mai endured a horrible marriage for two years and had a son, Ankh. She was beaten repeatedly and tortured. Finally, she left her husband and returned to her mother’s home. But her husband followed her.

“I was his property,” she shrugged. “Nobody ever divorced anybody. Women there live for the man.”

The horror played itself out one day when Mai rested in a hammock with Ankh. Her husband and father-in-law wrapped her and her son in the strands of the hammock like a net and carried them through the streets between the bicycles they were riding.

Mai’s screams brought out the villagers. Her husband’s father became enraged and said, ‘Kill her.’ The two men beat Mai with sticks until she blacked out. She awoke six hours later in her mother’s house after her mother had found her on the side of the road, the baby by her side.

“I was left on a narrow rice mat to die. To this day, I am still fearful of the torture my husband put me through,” said Mai from her Barrington kitchen, her eyes welling with tears. She took her baby and ran away. She lived by her wits for a year, but realized this was no life for her child. She brought him back to her mother and went to Saigon.

Then her husband took the child and she thought she would never get him back.

For three years, she hid inside the Tan Son Nhut base. She took care of two little girls for a wealthy couple and helped the cook. She tried to educate herself by devouring newspaper clippings in wrappings that the cook brought home from the market. Sometimes they smelled of rotten fish.

She was still in hiding when her country’s president, Diem and his staff, were killed and later, when our president, Kennedy, was assassinated. She decided to come out of hiding. She took most of the money she had earned and used it to send her older brother Than to high school.

“I bought him a government job,” said Mai. Soon, Than was drafted, got shot and could not support his wife and three young children, so Mai stopped her plans for an education and supported her brother’s family.

On Dec. 21, 1968, her string of terrible luck snapped. She met a handsome U.S. Naval officer from Massachussetts, Bernard ‘Brian’ Donohue.

Her attempts to educate herself in English began to pay off. The next day, she drove a Honda scooter by his office and told him it had broken down. She still laughs at the memory as her eyes brighten.

“We talked and he told me he was going to become a monk. I say, ‘He is so handsome. How could such a good-looking man become a monk?’ ” They went out for fried rice, even though she was dating “a CIA man at the time.”

Within a few days, Brian stopped by her house and said his Jeep had broken down. They married a year later. Their first child, Maura, was born in Vietnam just before the couple left for America in 1970.

“My husband worked very hard for me and my family. He never stopped. My husband cut through all the red tape to get my son out to live with us,” said Mai.

Ankh, already a teenager by then, joined his mother and his new family in Barrington. He is now a U.S. Naval officer in California with a child of his own.

Mai’s dream of an education was again put on hold, as she raised her family. Her children went to Barrington High School. Maura, 27, graduated from Smith College. She leads her own dance company in New York.

Maeve, 26, graduated from the Rhode Island School of Design and also works in New York. Barney, 24, attended Columbia University and is now seeking acting work in Hollywood. He still holds the Barrington High School record for most awards received by one student at the annual Awards Day. Patrick, 23, graduated from Stanford University and is a computer engineer for Apple Computers.

Aileen, 21, is studying biology at Bowdoin College and Eirene, 19, will be a junior at Brown University.

“They were all on financial aid in college. People think since we live in Barrington, we have a lot of money, but my kids have been working since they were young. Patrick worked at Taco Bell. Now, he makes $50,000 a year,” said Mai, under a dozen photos of her successful clan.

In 1993, Mai’s family and friend Becky Shepperton paid for her to return to Vietnam. After 23 years in America, she walked up to her mother to hug her. Instead, her mother slapped her hard in the face and said, “Where have you been?”

But she reconciled with her family over several weeks. “All we did was eat and talk. We laughed at things that we did when we were young,” said Mai in her memoir. “We laughed and cried. For the first time, I saw my mother’s face calm and peaceful and happy.” Soon, her mother was showing off Mai’s pictures of her children to relatives.

“She was a very hard woman. But she did the best she can. Believe it or not, I think no one ever loved me as much as she did,” said Mai. She will return to see her in August. “She is 82 and ill,” she said.

Now, it was finally Mai’s turn. On June 7, after five years of study, she graduated from the Community College of Rhode Island with an associate’s degree in general studies. The school named her one of its outstanding students.

“It is just incredible. It is like a dream I never thought I could have,” said Mai. “I have always been responsible for everyone else.”

At the graduation party, attended by four of her children and CCRI President Edward Liston, Mai cooked special Vietnamese cuisine for 170 people in her backyard. “No one left hungry,” she said.

This leads us to her next project: a cookbook called ‘Mai Goodness’ that she is compiling with friend Julia Califano. Mai is writing stories about her upbringing and the myths of Vietnamese customs.

She has also just been accepted by the University of Rhode Island to study psychology. She hopes to become a counselor to help others and is working part time, caring for a mentally disabled woman.

“My story, I guess, is of hope. Not just for me, but for other people like me who want an education but are afraid or don’t have the opportunity to do it,” said Mai. “I still cry, but they are happy tears.

“I cannot complain about my life. A lot of people have a harder life than I do. They can torture my body, but they can never destroy my spirit. My soul. I am still working on the story of my life.”

CAPTION: OVECOMING ADVERSITY: At left, Mai Donohue looks through family photographs in her Barrington home. Above, she stands beside her husband, U.S. Naval officer Bernard Donohue, at their wedding in Saigon.

[Copy Correction: Patrick Donohue holds the record for most awards at Barrington High School, not Bernard. Bernard spent his BHS days misspelling grafiti on chalkboards and trying to start a cult for dorks called "The Sons of Armand".]