« Back to book page 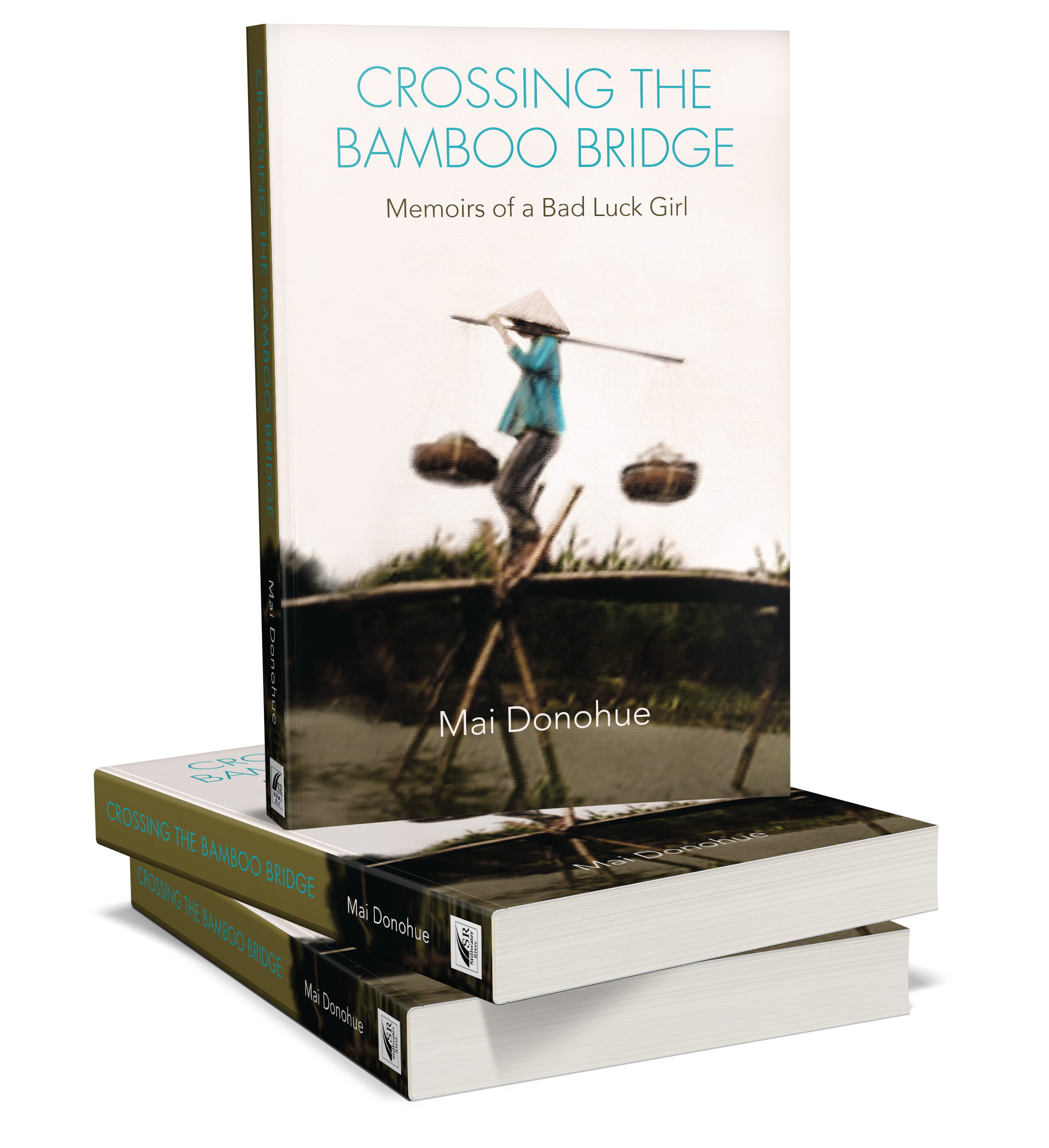 MEMOIRS OF A BAD LUCK GIRL

The first time I ran away from home I was six years old.

I had made my mother angry and she sent me to get a stick for my switching.

My thoughts were jumbled. One minute I feared to choose the wrong stick and the next minute I was angry.

I will not pick my own stick!

In my own mind I defied her. I decided to run away. I didn't know where I would go or who would take me in but anything was better than a whipping. I started running down the path.

My mother must have been watching me from the house. As fast as my small feet touched the ground, just as fast in the same direction my mother chased after me.

When I reached the bamboo bridge I stopped. I could hear my mother getting closer but I was afraid to cross the bridge.

I will fall in the water and drown like my ancestor.

I had heard the story, over and over.

"None of you children must ever come near the water! One of your ancestors drowned in this river. His spirit has no rest. It cannot go home until it is replaced. He is waiting for one of you! He will drown you so that his own spirit can be free!"

The fear of drowning and becoming a cold ghost had stopped me in my tracks. I was afraid and I was angry. I stamped my feet. I screamed. I yelled for her to stop running toward me.

The lifelong battle between us began that day.

While I screamed and yelled at my mother, all the farmers watched us from their rice fields. As much as my mother didn't want to lose face she was also afraid that if she pressured me too hard I would jump into the river current.

I moved one step backward. Two more steps and I would be on the bridge. Suddenly my mother rushed me and grabbed me by the hair. She yanked me off my feet and behind her. As I landed safely on the other side of her, all the farmers cheered her on. Her fear turned into anger. Her eyes were red and her black teeth were shut tight. She grabbed whatever she could reach to whip me. Swat, swat! I half ran, half hopped and crawled on the ground.

That night my older sister, Chi Hai, or Sister Number Two, came to me with a bowl of salt water. She used her fingers to cleanse my cuts and bruises. The salt made my cuts sting. I cried. My sister begged me not to be so stupid.

"Little sister, please obey Mother! Oh, Cam," she said, using the name my family asked my ancestors' spirits to give me, "Don't make her mad. She could have killed you today!"

"You must learn to be a good girl. If you do what you are told I will give you anything I own! Little sister, I don't want to see you punished like this again. You hear me?" She sobbed.

I said nothing. I just cried. That night my sister cooked sweet-potato soup for me. I couldn't lift my arms or open my mouth so she spooned the liquid into my mouth a little bit at the time.

After that, I tried my very best not to make my mother angry but the battle line had been drawn. I was always in hot water. My mother punished me for almost everything, to the point that when she yelled my name I would bring her a stick to save time.

According to my mother I was born in the year of the monkey - probably 1945 - I will never know for sure. During the war my mother did not have the time to track the moon.

My mother always said I caused problems for her even before I entered this world. That I was born into the world under a cloud of bad curses, a bad luck girl. Whenever she was angry with me, she would say, "You were a trouble child before you were even born. I carried you for thirteen months!"

She called me her elephant child because she believed that somehow she had walked under an elephant while she carried me, and that she had been cursed for this and had been punished. Whatever the truth, she carried me longer than any other woman in her village had carried.

She would go on.

"Then you almost killed me during childbirth. I was in labor for three days. I was dying! I sent your father out to get a coffin and what did he do? He came back with some high class broad! She walked in with her briefcase - she just looked like Madam [like a French woman] - and walked over to my bed and lifted up my shirt and looked at my big belly. She shook her head and walked away."

"Then she ordered everybody in the house to do this, and do that! Boil the water, cut the clean cloth, move the curtain, send the children away! If I had enough strength I would have gotten out of my bed and come over and choked her! On top of all of that she smoked a cigarette! Can you imagine that? Here I am in pain with the elephant child inside of me kicking nonstop! I am dying, and there she was, this woman, having a cigarette, filing her fingernails!"

What really happened was that this "high class broad" saved my life and my mother's life. She was a nurse and a good one. The Vietnamese didn't like the French but the French had helped educate many people in our nation. This nurse had been taught by the French, so she had some sort of education in medicine.

She wasn't like the ignorant midwife who lived in our hamlet and believed that childbirth was like a flower, that when the child was ready it would come out, that if things went wrong and the child or the mother died, well, it was the decision of our ancestors. She'd plant a banana tree at the foot of the grave and when it bloomed say it meant the child had been born on the other side. Luckily, my father had enough sense to go to the city and get this nurse.

It wasn't only my birth that caused her trouble. While she was carrying me, my father brought home a young second wife who was already pregnant. My mother desperately wanted me be a boy, but no such luck. In the end it didn't matter because the second wife also bore a girl, my half-sister. However, to compete with the second wife, my mother decided to get pregnant again right away, and had my brother Mang this time.

At that time my grandfather, the patriarch, was a major landowner in the valley and possessed hereditary power and wealth as the village chief. His father, and his father before him, and his father, had all been born and lived in the same house. Large tracts of the land surrounding our house and hamlet at one time had all been owned by my family, the Tran clan, which had belonged to Vietnam's nobility in centuries past. Even the hills behind us were named for our clan. Unfortunately, my grandfather had also chosen, in a valley of Buddhists, to worship the Cao Dai religion.

One night, when I was one year old, jealous local Viet Minh came to our home and killed my grandfather, my father and his two brothers. They threw my mother, seven months pregnant with her fourth child, into jail. Then they seized the family home and slaughtered all the animals for a banquet. As their excuse, the Viet Minh - who were also our neighbors - said my grandfather was supporting the Japanese. That was a cowardly lie. The truth was that he was Cao Dai. He had worshiped the wrong religion.

The sad thing was that many of my mother's brothers and brothers-in-law were communist Viet Minh supporters. They all turned their backs on us after my father and grandfather were killed, either because they did not want to associate with us or because they were afraid of the Viet Minh government. Whatever their reasons, my sister, my brothers and I became orphans to them, the village underdogs.

We had no father now, and the family no longer had wealth. Our mother was in and out of jail so many times she soon stopped caring what happened to her. She became fearful and angry, hard and full of hatred. She beat us whenever her fear took over her heart, which was quite often. With no man in the house we became fair game for relatives and our neighbors.

And, through it all, the bamboo bridge waited patiently.

Crossing the Bamboo Bridge - Memoirs of a Bad Luck Girl

An inspirational tale of courage and triumph against all odds.